I backed Microvania, by Tyler Magruder as part of ZineQuest 3. It is a hack of Ben Robbins' Microscope.

I'll give Microvania props for high production values (at least in choice of paper and finish) and a few interesting twists on the idea of Microscope: mainly that it reduces the scope of the game to the size of a computer/video-game environment, and makes use of recursion by means of obstacles which can only be resolved from exploring other parts of the index card map you make during play. 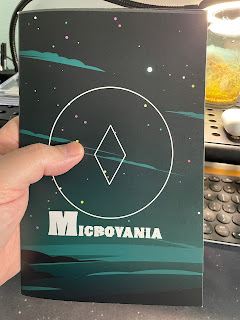 Now for the bad stuff, unfortunately. This game is poorly explained. The rules are vague at best, and often outright skip over elements. New card types are introduced without explaining how they come into play. There are no illustrations of a game in progress that would help you piece together what the author is saying. You could play it, but only if you are willing to fill in the very significant gaps and answer your own questions.

It's not like the zine format hurt this game. The author had plenty of space to make his ideas clear; he just failed to do so. Why do I say that? Because the font size and choice of art is cringeworthy. The font is huge and the copious negative space is given over to random images (really, there's no clear connection at all between text and image). This game is one page of hastily sketched out ideas stretched over 32 pages. SEVEN of those pages are given over to listing the names of KS backers, double-spaced, and an additional two are blank for "notes".

I don't like to give negative reviews, but this lackluster effort seriously pissed me off. I used to teach composition at a university and I feel like a freshman just handed me a 10-page research paper with 3" margins and an 18 pt. font. 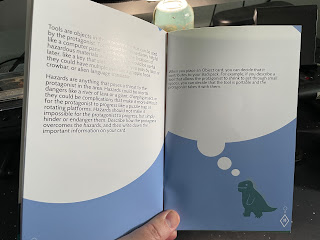 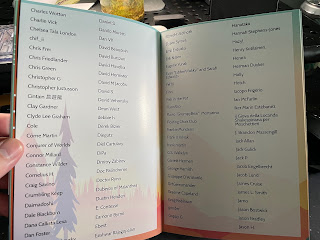 Buy Kriegsmesser – because I say so. If that isn't enough:

Kriegsmesser is a gritty and sometimes raucous look at the "long sixteenth century somewhere in Europe" designed by Gregor Vuga.  Think no/low magic; 'scientists', mercenaries, merchants, and spies; gritty and dark humor. Think careers not race/class, and d6s not d20s. Think about what the baby of Troika and 1e Warhammer with about 90% less goofiness and fantasy would look like. Think about running away if someone points a pistol, or even a nice sword at you! 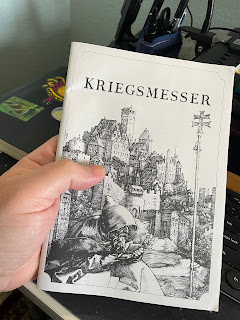 Overall an extremely well-written and inspirational zine. But the cover is a bit floppy/thin. 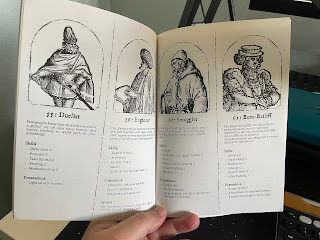 Kriegsmesser can be played with Troika (Fighting Fantasy, Jackson & Livingston) or with Gregor's own, onboard system that seems to be about 50% Lasers and Feelings (John Harper) and 50% Dungeon World (LaTorra & Koebel).

I backed Kriegsmesser during Zine Quest 3. Here we are, just 2.5 months later, and I have both a PDF and a physical copy in hand. There was roughly one update a week between successful funding and delivery - just the right amount. I got the Preview 3+ weeks ago, the PDF over a week ago, and the zine this week. So, congrats on a clear, well run KS campaign go to Gregor Vuga and his team! This is what a really professional KS feels like - not too aloof and not too chummy, no gratuitous stretch goals or messy piles of digital files, clear expectations were set and then delivered upon.

The zine packs a lot into it. A bit about the implied setting is followed by a short page of character creation rules and 36 careers, one of which each player's character gets at random. After that comes a basket of goodies: a rules base that's a good alternate to Troika, optional rules for combat that makes it a bit more mechanical and/or more likely to cause scars than death, some thoughts on running the game, a whole system for creating flavorful NPCs, a method of generating towns and adventures, some flavorful pre-generated scoundrels for encounters, more info about the 'long sixteenth', and a final thought on playing the game in other times or places.

And in case I have done this zine a disservice, here are Gregor's own words from DTRPG.com:

Kriegsmesser is a tabletop RPG zine that was created for #zinequest 2021. It was inspired by history (cca. 1453-1630) and roleplaying games named after medieval weapons.

"Its focus are 36 backgrounds compatible with Troika by Melsonian Arts Council, but it comes with a set of custom rules and can be played standalone.

What is it not?
• It's not a historical game as such, it's fairly anachronistic and sparse on detail.
• It is not high fantasy with evil gods and orcs and wizards and pirate elves on lizard mounts."