TLDR: This is entry #1 in my design diary for (working title) Hardscrabble, a solo, tile-laying, dungeon crawl game. Please don't steal my ideas before they are even finished! :)

Let's start with Bananagrams. You've all seen it on the shelf at Target. Maybe you were interested because you liked word games (and it's a pretty decent one). Maybe you looked because you wanted a supply of letter tiles for craft projects or impromptu game counters. Maybe you immediately decided that the zippered banana-shaped pouch would make a cool dice bag. I was hooked for all three of these reasons. 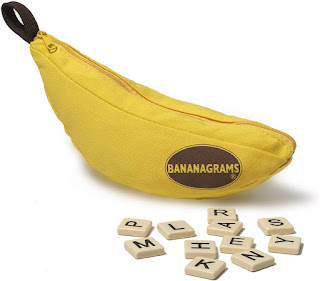 As a designer, I quickly started seeing all kinds of potential in this super portable game, aside from the ones already mentioned. (To this day I carry a set of A-Z tiles in my dice bag to use as quick miniatures, for randomizing names, etc.) What I liked about them was the tactile nature of the plastic tiles. They are fun to manipulate and work into grids. The game itself, of course, plays with this idea and has you fashioning freeform crossword puzzles. But if you turn the tiles over so they are blank, or start looking at the letters as a kind of code instead of components of words, opportunities open up. Pretty quickly I began thinking about using these tiles as a kind of ad hoc map. I remember sending a picture of my hotel desk top to a friend with the tiles laid out in a 'dungeon' and a pawn sitting on one of the tiles as far back as 2016.

At the time, I was paying a lot of attention to the distribution of the letters, which turned out to not be a helpful starting point. (I'll explain why in a moment.) But if you are curious, it turns out the distribution of letters for B-grams is very similar to that of Scrabble. Scrabble has 100 tiles distributed as follows, and B-grams seems to just have the same rough distribution with more tiles (sans blanks).

Of course this is all based on English language letter frequency. But their value as word components doesn't interest me. While I like the manufacture of, and ease of acquiring B-grams tiles, I decided the 100 tile distribution of Scrabble was more satisfying. So I bought copies of the former and designed using the latter. The first step was to rearrange the letters from most common to least (e.g. E/12, A/9, I/9, O/8, R/6, etc.).

Then I boiled down dungeon components into an abstract symbology of 'straights,' 'bends,' 'Ts,' etc. representing hallways and rooms without regard to length and size. (Early experiments had me rolling dice to determine how many tiles long a hall was, or how many tiles were in each room.) I have PAGES of journals filled with these notes. 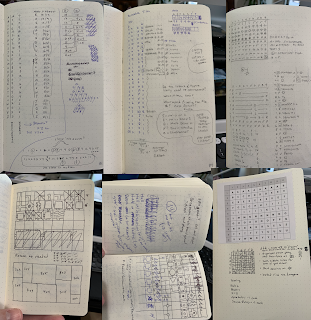 Eventually, 100 tiles was too much to wrestle with still. So I concentrated on filling out a table of basic shapes in a reasonable/minimalistic size and getting the distribution right. I ended up at a 6x6 table. I am a fan of the 'd66' roll and have been since I first saw it (I think in GW's Necromunda advancement roll tables). Basically you roll the d6 in sequence and treat them as the two digits of a number, so a 4 and then a 6 make 46, not 10 and not 64. You can roll the dice at the same time if they are different colors and you designate which one is the 'tens' die. This table allowed me to test the distribution before I marked up my pristine B-grams set with a Sharpie. It went something like this: 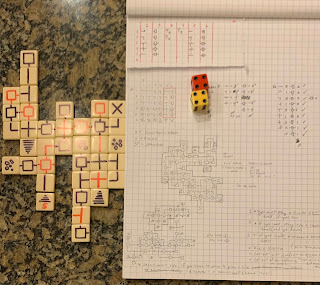 The d66 table I used appears left of the dice. The dungeons I generated with them are below the dice. And to the bottom right are some preliminary tile laying rules. The marked up tiles on the left are the result of a bit of noodling around. I think I ended up wasting 4 tiles as I adjusted the distribution one way and another. Red tiles, by the way, represent halls and rooms that automatically present some kind of encounter (wandering monsters, guarded treasure, traps, etc.).

One distinction worth making here is the randomly generated dungeons vs. the tile-laying dungeons. In the former, you can essentially recycle each piece so that playing it doesn't use it up. In the latter, you have a total of 36 tiles to play, period. It's possible that I will end up making this pool bigger (100), but right now I have found it very satisfying to use only 36 per level. Here are just a few of the MANY dungeons I generated in testing. Spiral tiles, BTW, were a secret doors experiment. 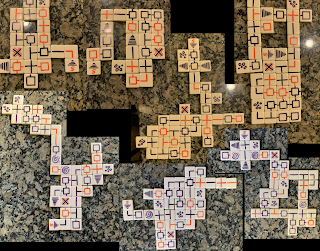 At this point I was comfortable that the tile laying worked, was fun (and oddly satisfying), and generated interesting enough structures for play. So I wrote up the rules for this part of the game and started working on a challenge of personal orientation. I had this design question in my mind about whether the player was oriented 'above' the map and could play a tile anywhere, or whether I wanted the point of player orientation to be 'on' the map (standing on a tile as a character in the maze), which would mean tiles could only be played where the player/character could 'look.'

The real problem seemed to be that orienting one's self on the map as character, while satisfying from a visceral standpoint, took away a lot of player choice/agency. When you have to play the next tile adjacent to the one on which you stand, often the tile played itself (no choice of side).

Watching a friend play through the maze with a pawn on the tiles helped me realize an elegant solution to the problem. To lay a tile you must be able to "see" into that square. So line of sight (forget doors and assume you can look anywhere there's a hall pointing away from you in a straight line) matters. If you want to lay a tile where you can't see, you must first move your pawn to a tile where you can see into that space. When you move, you take a risk. Count the tiles you move across (value = X, max 5). There is an X-in-6 chance (roll a d6) that you will suffer an encounter with a wandering monster.

I feel like this brings phase 1 to a close. I have my movement rules, tile distribution, and general concept down. Here is what I know in short form.

1. You get 36 tiles in a fixed distribution.
2. You start with the S-stairs down tile and draw one tile at a time from a bag as you play.
3. You can play a tile anywhere you can see. If you want to move first, do so, and roll for wandering monsters.
4. Play the tile. If there's no place it fits, play it face-down anywhere as a secret door. You can play future tiles on any open side of it; for mapping purposes it is a + intersection. Future tiles will reflect that.
5. Every red tile is an encounter. If you move onto it in the future, you must confront it. I'm not currently sure how that plays out and affects movement. I'm thinking I ditch the X-in-6 rule above and just have a way to mark red halls/rooms that have been 'beaten.' IOW, if you have to move to play a tile you might have to move through a previously played red one, which would force you to stop and take the challenge it presents. Once you beat it, you mark it. Probably flip it over and record the letter.
6. Rubble counters can be set aside and saved for later. You play them to close off 'open' sides of the level for scoring purposes. This was the initial rule. I'm thinking now you have to play them just like other tiles, which would force you to move.
7. The X counter is a special, extra-dangerous, boss encounter. For mapping purposes it is a + intersection. Future tiles will be drawn to represent that. Also the stairs tiles need a directionality.
8. Your score, after playing all the tiles is as follows:


You may or may not see just how much work has gone into this already. It's pretty hard to work out some of these problems in an elegant fashion. For instance, where "you" are on the map? What happens if you can't play a tile? Why would you challenge a red tile instead of going around it? What is the penalty for sloppy exploration (not finishing out areas/leaving open sides)? Why does score matter, beyond an abstract measure of how well you did? How do I represent large/complicated rooms vs. small/simple ones?

I'm excited about the next phase, which involves building a boardgame style character and conflict system and the first 'key.' I'll probably do the latter first. The red tiles will be marked on distinct letters so that you can make a key to the dungeon (each level actually). It will allow me to release future dungeon packs using the same rule and, indeed, for fans of the game (if any) to make dungeons for each other as well. This will make the game replayable over the long haul (once you beat all levels of the starter dungeon.)