The Rhyme & Reason of Troika Damage

I've been thinking about making a Troika hack for some time. Before creating material for a system, though, I feel obliged to analyze it a bit. One aspect of Troika that I find interesting, and perhaps a bit dissatisfying is the scaled damage that it borrows from Fighting Fantasy and the approach it takes to expanding and varying those scales.

What Is Scaled Damage?

That's what I call it anyway; I'm referring to the idea that the die roll, rather than being read at face value, corresponds to a scale of damage by weapon type.

In most RPGs a damage roll is a straightforward event. If a mace does d8 damage and you get a strength bonus of +1, a roll of 5 would result in 6 damage. (Roll of 5 +1 for strength, in case that wasn't already painfully clear.) In Troika, you would roll a d6, possibly with bonuses, for damage. But your damage would be (for a mace) 2, 4, 4, 5, 5, 8 or 10 respectively, 10 being the damage resulting from a modified die result of 7 or better. If you rolled a 2 and had a bonus of 2, your modified die result would be a 4, but you don't do 4 damage. You would do 5 damage (the number corresponding to a die result of 4). It's pretty simple in play because you just copy a table onto your sheet next to your weapon like this:

The "#" indicates the mace ignores 1 point of armor.

There are lots of variations on these damage arrays. (Click on the image below to "embiggin" it.) Weapons marked with an asterisk are two-handed. A shield is included for things like shield bashes. 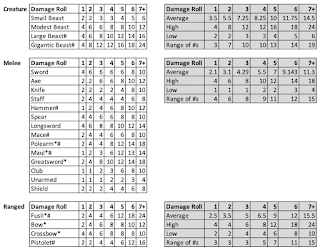 The first thing to note is that every one of these lines is different. The theory, I suppose, is that each weapon has a different profile and will feel different in play. Note the average, high, low, and ranges of each block (creature, melee, or ranged). It's hard to see much in the way of trends besides the fact that variance (the range of damage possible) increases the higher the roll. This reflects the basic fact that some weapons are fairly consistent in their damage dealing, whereas others are fairly explosive. A mace deals from 2-10 damage, but a greatsword ranges from 2-18 and a fusil (longarm gun) ranges from 2-24!

Is all this difference warranted, useful, or interesting. My gut says no, no, and no. For instance, clubs, hammers, and maces all have different damage profiles, but the differences are really minor. I feel like the whole table could have been reduced to 5 or 6 types of damage profiles. Also, while there will always be arguments when it comes to realism and weapon damage, the lethality of bows, specifically, and missile weapons in general, are probably inflated. Especially considering they represent the potential of dealing damage at a distance, without receiving damage in return.

Here is a chart of weapons ranked by average damage, with a 0.5 bonus calculated in for those that ignore a point of armor. 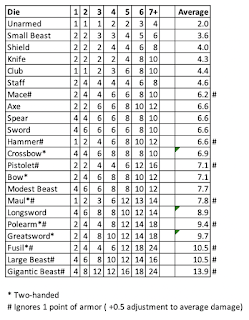 I'll let you decide whether these rankings are "correct." But please note that while a spear and sword, for instance, are weaker than a hammer, they also have a much better bottom end (4 vs. 1) and so are more reliable at dealing damage even when the rolls are weak.

One method of simplifying the system is to go to the dice and scrap the tables altogether. Here is an example of how damage might be done with only d6s and a few categories and tricks.

Creatures do -1, +0, +1, +2, or even +3 based on size and can also have the armor-piercing or explosive trait. The latter would be rare, probably for special attacks like fire-breathing or trample.

What Would I Do? Why Does It Matter?

Would I, in fact, replace the Troika scales with a simpler system like the one above when hacking the game?

Like most things, it depends. As I see it, scaled damage has two major downsides: 1) the small lag at the table that happens every time a player rolls damage and then checks a table, and 2) working with scales forces me, as a designer, to create new weapon profiles as needed. For these reasons, for most hacks, I would make damage once again directly correlate to the dice as in the alternate system above.

The circumstances that would push me to keep the scales would be settings where technology and one's personal choice of weapon is extremely important. Possibly also a setting where there is a consequence to carrying around weapons openly. The alternate system above does somewhat compress the damage. Also, one advantage of the scaled damage system is what happens when the die is shifted up or down one step. A -1 to a damage roll for a Greatsword could reduce the result by 4 points! It's hard to replicate that kind of shift in a simpler system. Straight dice rolls don't give you that kind of dramatic damage curve.

The take-away here is just this ... that it could indeed be simpler – easier to remember and faster to execute – but at the cost of weapon character and dramatic damage shifts.

If you don't know what this is about, see page 1 where I discuss some early design work for a tile-laying dungeon crawling game. There I predicted step 2 would be the character and resolution mechanics, but I ended up side-stepping that to do some research into other crawl games like Death Maze, Citadel of Blood, Heroquest, Descent, Four Against Darkness, etc.

What I have learned from research and playing other solo or cooperative crawlers.


That's probably enough for now. These lessons ended up being design goals really:
No comments: