TLDR: town building was/is kinda tedious. Does it have to be?

I finished my Gygax 75 Challenge months ago now and I've released the workbook with examples in it. You can find it, and my other games, at https://rayotus.itch.io.

That being said, I could probably go a little deeper into where my head was at when I actually built the town of... 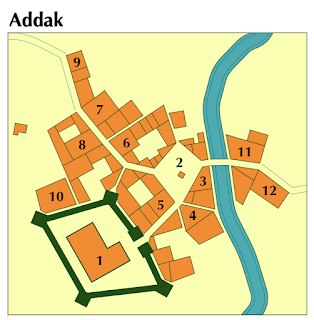 Exciting huh. Well I mostly just generated a town using this, Watabu's Medieval Fantasy City Generator, and colored/numbered it up. Of course then I had to describe places where all the numbers were, build NPCs, seed some rumors, generate a few hirelings, etc.

In the original version of the workbook I took a more workmanlike approach that was tedious to implement. Even though it doesn't take much mental effort to name a store where adventurers can buy sacks, backpacks, shovels, and lamps, the result is about as exciting as the process was. In other words, boring processes produce boring results, at least in this case.

So in the rewrite, I turned the process into creative prompts, asking players to write a short sentence on things like:


I also suggested a very quick method for NPC building. The DNA method. D is for a Distinguishing trait of feature. N is for what they Need most. A is their Agenda, secret or otherwise; what do they hope to do in the following days, weeks, months, or even years? (Alternately, A could stand for an Asset they have that the players need.)

I don't know if this is the strongest section of the book now, but it's way better than the version I personally experienced while building out Uzrak. Imagine that, playtesting makes a thing better!
No comments: