I'm getting ready to host a cheesy, miniatures and terrain heavy OSE dungeon run for a birthday party (mine). To prepare I made myself the following PDF to print on card stock, with record sheets for characters, retainers, and monsters printed appearing as if typed on an index card.

I'm sharing it with anyone who wants it, but my purpose is all about running the game quickly and 100% old school pencils & paper & dice & minis. Here's what I have so far in note form if you are interested. 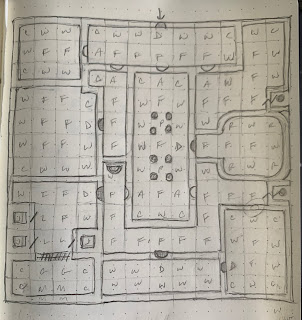 Enter from top, four archways. Guard room to one side, view into pillared hall straight ahead. Bottom left in diagram is a jail with three cells and a big area gated off. Thinking of having a surly minotaur in this room that has kiestered (sp?) a key up his bunghole that the characters might benefit from on a lower level. They have to talk him out of it or kill him. If they kill him he will groan "you are worthy, take the key, and his relaxing sphincter will spill it onto the ground along with some other stuff. (Yuck. I may have gone too far there.) On the right edge are two funky tiles on either side of the round room. They are essentially cul-de-sacs with a crack/opening. Thinking of putting spellcasters behind these shooting lightning bolts. In the central pillared hall there will probably be a pouncing rust monster. If killed, when players leave the hall a new one is released via a trap door. One room is definitely going to have flumph's, because I painted these the other day. 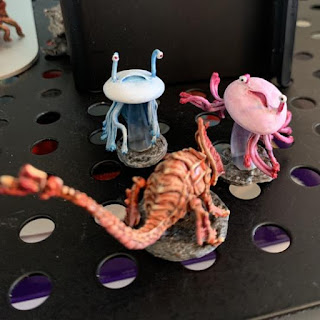