TLDR: how I made a quickly-doodled map more interesting using a visual walk-through technique.

I doodled this map in my journal about a month ago. I had to plan for a game on the flight home from a week of working in another state. Long story short, I didn't end up needing this prep that night, but I liked where the idea was going and decided to develop it as a short module in zine format. 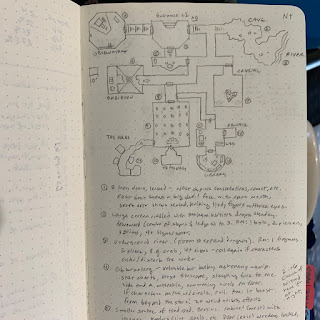 As per my usual habit, I started working on the zine by setting the format, fonts, etc. I like doing that for short zines because you can write, layout, plan art, etc. all at the same time. Also each page or spread of pages gives me a target length for one "leg" (encounter, level, whatever) of the adventure, keeping in mind "control panel" layout philosophy.

Next I began developing areas, personalities, encounters, etc. I had taken a photo similar to the one above and pasted it into the zine as a place holder. When I work, I often switch between writing and art (a day or two at a time) to keep up momentum on the same project but also introduce some variety.

Anyway, after drawing the cover (which I have posted on other social media), I decided to redraw the map on my iPad and it came out looking like this: 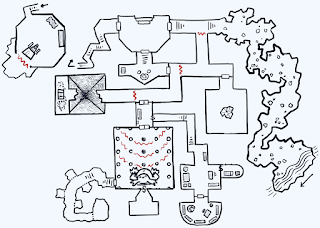 It got a bit off-square due to an accidental stretch during image manipulation, which was the beginning of the impetus to draw it yet again. But in looking at it, I realized it had a much bigger problem than the fact that it was skewed.

It was too linear.

I specifically asked my eyes to trace possible routes through the dungeon and found myself reversing a lot. No good. So next I kept the same room ideas, but sketched them out as a point-to-point set up. (Top half of image below.) Connecting some of the rooms that weren't connected before gave me the idea of developing it more vertically. 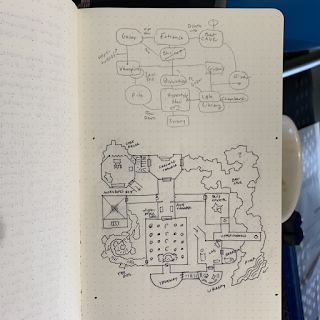 I already had in mind a long climb up to the observatory (top left) and a slow slope down to the river (top right to bottom right). But this time I decided to elevate the entire wizard's suite (bottom right cluster of rooms) to the level of the observatory and give him drop-down points into the other levels. (Why would a wizard use stairs when he can levitate!?) This elevation also makes it harder for characters to access his rooms.

The map ended up like this. (It's rotated 90 degrees clockwise from the drawing above). More compact, more circuitous, more leveled, and generally more interesting. 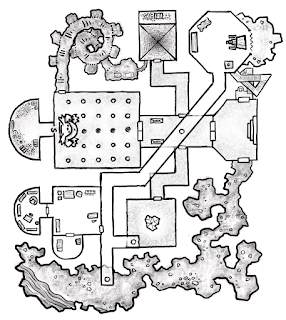 The grungy dark layer is the lower level, mostly caverns. Players probably enter through the grandiose stairs down (middle of right side), and that whole grayish area is the main level. The unshaded area is the wizard's level and the circles are his drop-in points. They are just holes, but concealed below by minor illusions to look like the rest of the ceiling.

The point of all this is that the map got WAY better when I decided to a) check for linearity and b) do it with a mental walk-through exercise, using my eyes to trace routes in, through, and out.

(BTW, there is one obvious way in/out, and two less obvious methods of ingress/egress.)

I'll let you imagine most of what is going on here as it will be in my next zine, which should be done in just a few weeks. In the meantime, this visual walk-through technique can prove handy whether you are drawing your own maps or learning someone else's map, in preparation for characters to run through it.