TLDR: this book is a hot mess, but buried in it is an interesting, if IMO flawed, perspective. 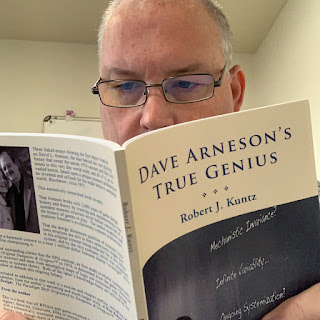 This is my reading of Rob Kuntz' book: Dave Arneson's True Genius. It was not an easy work to unlock. Any errors in representing it are mine. I am very critical of Rob Kuntz in this summation and review, even though I found some of his thoughts "interesting." I don't want anyone to interpret my dislike of this work, or its execution, as in any way devaluing Arneson's contribution to D&D. It has been established in very authoritative forums (like Peterson's Playing at the World) that Arneson contributed a number of critical, innovative, and formative ideas to role-playing in general and D&D in particular.

Who is Rob Kuntz?

Rob Kuntz, as a teenager, lived with Gary Gygax's family. He was there when Dave Arneson demoed Blackmoor to Gary in 1972 and was an early playtester, taking part in Gygax's Greyhawk campaign of the same year. He literally saw the birth, a good portion of the evolution of D&D. Rob also worked for TSR from its founding through 1977.

When Gygax used Arneson's ideas to design D&D, he did irreparable harm to Arneson's legacy and the entire potential future arc of the hobby by:

My Impressions of the Book and the Above Claims

Dave Arneson's True Genius is frustrating to read because of its poor organization, vague ideas, and ridiculously stilted and ornate language. Some paragraphs are so convoluted that I had to guess at their meaning after several failed attempts to decode them into English. The entire book has only about 55 pages of actual (widely-spaced, large font) text, and they contain the same half dozen ideas repeated throughout.

The argument that Gygax damaged Arneson's ideas, and his future potential, and hoodwinked us all by selling us a set of rules that falls short of the Platonic ideal of a role-playing game is academic, rhetorical, and immature. It boils down to crying over what might have been. This is especially silly when one realizes that Arneson had decades in which to present an alternative by a) fully describing his original play style and b) building on it. Arneson failed to do either of those things in any way that engaged or inspired a significant portion of the community.

In assuming that the move to a closed set of rules (with AD&D) was solely about denying the creativity of DMs, Kuntz misses that it enabled a more communal, common play experience and the production of adventure modules (some of which Kuntz helped write). Otherwise he makes a fair point about the shift in corporate attitude regarding extensive "home rules."

As for the accusation that Gary never played his own rules as written, I say "a designer designs." It's no wonder that both Gygax and Arneson sessions were more "R&D" than "QA."

Part 2: The Garden of Eden

When he is not blaming Gygax for putting D&D on the wrong path from the outset, Kuntz is lauding Arneson's genius, ascribing to him amazing feats of intellect without actually describing most (any?) of them. In trying to imagine what we missed due to Gygax's nefarious activities, Kuntz suggests that any forward trajectory from Arneson's conceptual model would essentially end in a recreation of "the human brain." Any "throttling" of the system would damage its potential.

If we were to indeterminately throttle his [Arneson's] conceptual model into the future what we would note as an end result would be akin to a massive array of information having multi-functional processes interconnecting at all points. Eventually we would have the workings of the human brain (Kuntz, 41).


It sounds like Kuntz is talking about artificial intelligence or perhaps a Futurama-like visualization of Arneson's brain in a jar. It's a game of passive-aggressive keep-away in which Kuntz tells us we have done/are doing RPGs all wrong while simultaneously telling us it's virtually impossible to describe the right way – the Arnesonian way. "... what system(s) organization transpires in their [TSR/WotC D&D] place would be anyone's guess (Kuntz, 40). [Emphasis mine.]

To read him in a more charitable light, the best possible role-playing system would be one that exists only in the heads of every DM running a game and would be entirely unfixed – free to evolve and iterate as needed. Kuntz calls this the "Garden of Eden" state. Mechanics are fluid and the hivemind of players both allows for expansive movement by invention and contraction by a general consensus of best methods.

To me, this is the real meat of the book. The thing I was waiting for. Perhaps the best way to read Arneson's True Genius is to just start on page 40 and end on page 48.

My Thoughts on the Garden

This Garden of Eden argument reminds me a bit of Dawkin's Selfish Gene (1976) in which he invents the term meme (with a meaning quite different than it has in today's social media) and discusses the way songbirds communicate ideas through imitation and innovation without losing an innate quality of sameness. I kind of wish Kuntz could have made his argument (only) along those lines. Had he simply defended role-playing as an activity owned by everyone – and left off blaming Gygax for bottling spring water – he might really have been saying something important.

As it is, Kuntz' writing reads like an academic fever dream that would be "like, really deep, man" after the joint has been passed a few times around the circle. He is reluctant (unable?) to quantify anything about Arneson's genius and leaves it almost entirely to broad, unsupported, and ultimately meaningless declarations.

Sadly, I would have to say this book is an embarrassment and possibly does more harm to Arneson's legacy than good. And yet, if you can get past all of its flaws, there is at least one clever thought in Kuntz' rambling manifesto.

The final few pages of the book are a clumsy and strangely-argued attempt to debunk Arnesonian D&D as a derivation of Chainmail and/or Brauenstein. The conclusion is that those two texts were influences, but not ingredients, and I'm fine with that. The argument isn't worth reading.