I think it may be safe to say I'm a little obsessed with playing Delve (see earlier posts). In fact, my next post is going to be a more in-depth look at the rules as a kind of FAQ.

For now, let me tell you about my current hold.

Day 1 journal entry: Today's Delve is going well. An hour in and no show stoppers. Although the lich-queen came very close to ending my digs for good. Experience is starting to count. I built a temple early and was ready for that damned Demon Portal that I always seem to draw. I've had some good luck too. That crystal cave put out trade goods for a huge number of turns and both times I ran into gas pockets, they were blinding (only). Not toxic. I definitely wasted money on that drawbridge though. Didn't know I was going to hit an underground lake. 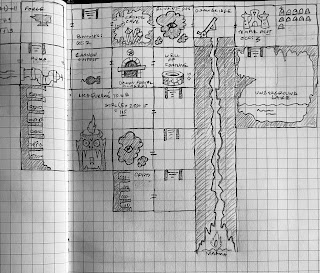 Day 2: The Delve continues... So what happened today? I got most of the gas cleared up. But when trying to expand my first level I ran into magma that wiped out my Mason and Forge. Lots of monsters vanquished, including a crypt of Skull Dwarves, Fraxilector the Golden (a dragon), and a hive of Black Wasps. Mostly by flooding. Again, I think pumps might be overpowered or rather that more things should have immunity to them? I dunno. I also had to sac another cleric to close up a second demon portal. I've uncovered two wishing wells and a buried temple and haven't had the guts to use either - I'm afraid of bad magic. The biggest item of note was running into an ancient monstrosity in the form of Metus - Dancer in the Dark. Luckily? He immediately disappeared (Mastermind) and will come back the next time I draw a King card. I also have a sleeping dragon, Dranigar the Surly, on my hands. I've stolen from him twice and gotten away with it. I can't resist those 20 diamonds! Treasuries are low 34 hearts and 32 diamonds. But they've been lower. Stopping for today to think about building more defenses. 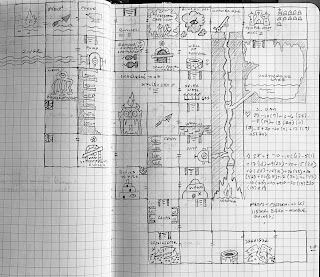 Email ThisBlogThis!Share to TwitterShare to FacebookShare to Pinterest
Labels: Delve