Here is a quick example of play for Delve (see my last post). I didn't track my cards and expenditures, I'm just going to kind of tell the story of what happened as I remembered it.

At first the digging was easy. With some lucky draws and the starting funds, I built a Barracks, Kitchen, and Forge.

Digging down I ran into an underground lake that flooded the level. I drained it and installed a pump.

Digging away from the lake I ran into an ancient library which released evil magic. It opened a portal to some kind of demon circus. Twice the demons clowns spawned and twice I flooded them out with the pump. 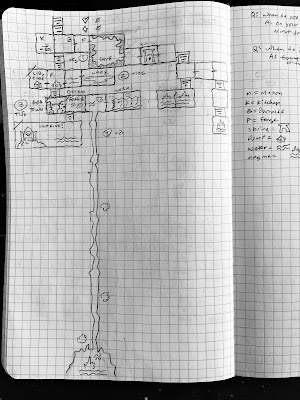 The Hold, at the end of the first session.

It was at this point that I had to make up/add some rules about pumps. The rules say you can activate them in flood mode. And water goes up to two spaces in either direction, and as far down as it can. The rules don't say how/when you activate the pump in this mode or whether it is useable again. So I made up the following rules. To activate a pump you need a unit there. They may retreat one space after activating it (so they don't die from the resulting flood). You can't activate a pump in a room with enemy units. Afterward you have to pay 5 diamonds (per the rules) to drain the room and 5 hearts to reset the pump (as if it were a trap).

Knowing that the next time the demons spawned they would get to the pump room ahead of me, I went back to the first level and worked sideways, building a shrine and recruiting a cleric. The cleric immediately sacrificed himself (and 20 diamonds) to seal the hell-circus. (Later I recruited another one, just in case.) That problem dealt with, I tried to go down on the right side of the digs.

On the right side, I kept hitting magma. Sigh. Back to the pump room. I dug down and hit a goblin village. I had 10 troops (total STR 75 because of the kitchen nearby), so that wasn't a big problem. Then I hit a golem forge, and a magma tube. And then a purple worm.

I dug down at that point and hit the Lich King's chambers. It and/or its army of undead was huge - 120 STR points because of the size of the room (5 x 20 STR) and the level (+20 STR for L4). My troops were depleted from the goblin fight and it looked grim. So in the ensuing battle I reversed the pumps, causing a flood.

The flood went down into goblin town, over into the golem forge, down into the Lich King's hall. Problem solved.* I wasn't really thinking about gravity though, so I actually had the water run over two spaces.

Which meant the flood waters ALSO fell down the magma tube. What happens when a flood of water hits magma? My guess was gas. I used the random table for one of the gas rooms to see of what type it was, and it was, of course, toxic.

The gas rose and filled level 3 (left side). Then level 2. Then level 1. Where it wiped out my remaining troops.  At this point, I spent my remaining money clearing a few chambers of gas and water, and decided to quit for a while.

* Ok. Per the rules a flood defeats any troops. Should it defeat undead? I don't know. Maybe the force of it scattered their bones. I suppose I could have ruled that it didn't affect undead, in which case I would have lost the fight and the Lich King's horde would have reached my stairs to the upper realm and caused my hold to be a failure.

As you can see, this game requires some adjudication from the player. I wasn't totally comfortable with the rhythm of the game at first to trust my judgment in these matters. Was I being too hard on myself? Too easy? Was I missing stuff? After a few sessions (no void crystal yet), I'm getting the hang of it. I can see how it work better on a 1" grid, as suggested by the author, but I like playing in my digest-notebook.