Federico Volpini recently shared his very cool bug-centric mini-setting for Troika! with me. The writing is great and the art reminds me of the Tenniel illustrations from Alice in Wonderland. The world is full of crazy, flavorful details: freon zombies, punk foodies, dust monks, a bug pope, a weird landscape of human refuse... great stuff. (You can pick it up on itch.io.) 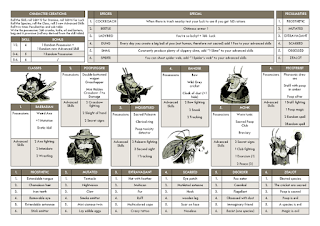 A few very minor criticisms. The introductory paragraph is a bit of a cold start, throwing you right into the setting. So just to state the obvious: Agramabug is an RPG setting compatible with Troika! in which communities of insects scrabble over the discarded wastes of humans hoping to attain power, security, and prosperity. The text is also a bit tightly-spaced, but then I think my 53-yo eyes are just always craving a little more white space these days. My 23-yo self probably would have loved the denseness of the design.

Is there such a thing as too many poo jokes? I feel like the setting is scatalogical to a degree that would get a little old. What else matters to bugs -- water, pollen, seeds? It bears thinking about before you throw players into the setting.

Back to the good stuff. The lists. Oh my gawds, the lists. I have a soft spot for lists because a designer can pack so much setting into them, and that's just what Fredrico did. The classes are great too, and if you know Troika!, you'll know that this is its other primary tool for communicating setting.

The world is both comical and dreary at the same time, if that's possible. It could be played as grimdark or wildly comic, or both. My first addition would be some hippy-granola bugs who live on a sunny hill filled with dandelions, just to give a bit of contrast to the extensive landfill that Fredrico provides.

Perhaps the highest bit of praise I can give to Agramabug is that I want to play it. My default reading stance after a few paragraphs was "how I would run this" not "is this any good?" So clearly I made up my mind on the latter pretty fast.