Knights of the Road: Capsule Review 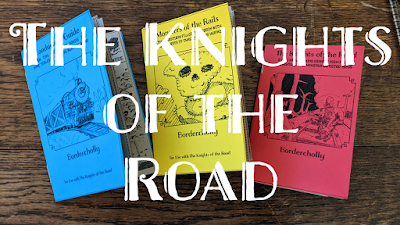 This tripartite micro-zine takes the bones of Electric Bastionland and fleshes them out with a vague, early 20thc weird west setting. Sound cool? It is. (You can get it here.)
When I first heard about this zine I got the impression that the player characters were hobos, partly because the GM was called a "Conductor" (as in train conductor) and partly because they are roaming around 1920s (?) America on rails. But the characters aren't just tramps looking for a handout. Instead, they are part of an order of vagrant-knights who move around undoing evil-wrong-bad things. Also, America isn't really America; the setting is a fictional analogue of America. The time is equally hard to pin down because of inconsistent references to technologies. Even so, the result is a charming (and liberating) mass of ideas. Vampire lords run the rails. Cryptids like chupacabra and bigfoot infest the darker corners of the world. The landscape is peppered with haunted abandoned movie sets and alien crash sites. Great stuff.
I'm going to pick at the product a little in the next few paragraphs, but let me make it clear that I think this is a brilliant little zine and fills a niche you rarely see filled.
The product itself is readable and mostly clear. For $5 (digital) it's a bargain. The art is a little sparse but cool and proper for the setting/overall feel of the zine. There are quite a few typos and grammar gaffs, but nothing that would really throw you for a loop. I don't have the physical product (yet) but I hear they are quite small. The title fonts are nice, but I found the body text font a little clunky.
One other thing I want to note that is both a positive and perhaps a negative - the zine includes an example of play. This kind of thing is rare for zines, so I applaud the inclusion. However, the example is almost laughably condensed. It's basically a whole game session (or at least a major encounter), start to finish, in two micro-pages. Even so, it gets the idea across, including the fast-and-loose nature of conducting a light RPG like this.
For a zine-game, KotR is surprisingly complete. A full book of monsters, quite a few story hooks, GM advice, examples, etc. It really covers the bases. I highly recommend it and would love to run it for one of my gaming groups.
I'll leave you with a tiny bit of the awesome, full-color map included with the KotR. 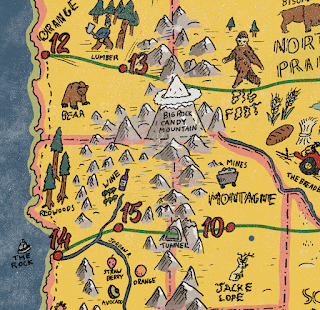