Into the Odd: The Greenman of Darling & The Iron Coral

Into the Odd, Session 1 (one shot that might lead to more)

Five workers from the Rumfield's Redcake factory ("perfect at nine, noon, and nightfall!") rescue the Greenman and explore the Iron Coral. Chargen and rules introduction included. 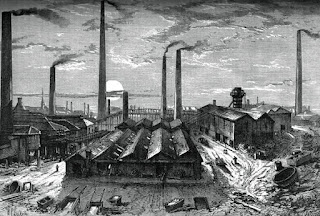 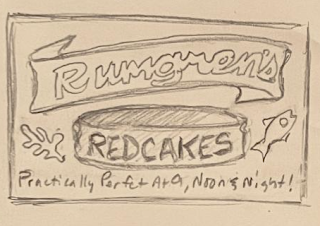 Practically perfect at nine, noon, and nightfall!
One-eyed Jack is a guard trying to earn enough money to set up his younger siblings. Ansovald Widenfield is a son of the factory owner with a supervisory title and zero interest in the humdrum factory life, oh and he has a pet eagle named Mort. Shemp works on an algae boat with his dad and son; their boat was recently repaired with money borrowed from the bank. Biltong is a dangerous drunkard who works in the hell of the algae drying room. He carries around a bomb and thinks about sabotage. Lemmy Reeves works in the forming room and has a gambling habit. He also has a 'magic key' that gets him trough any door/wall. 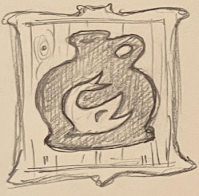 After work on Friday the group visits their regular pub, the Pickled Herring, to collect their factory benefit of a "daily dram." Responding to a commotion coming from outside the tavern that causes the spit dog to turn the meat too fast and hurl hot grease at the patrons, the crew become embroiled in an altercation between a fleeing boy with a glowing green beard (Charlie Brumfield aka The Greenman aka The Wee Man of Darling aka The Leprechaun) and some ruffians who work for Dr. Mysterio's Singular Sideshow: August Chop, a portly man with an iron leg; Junas Jongler a head carnie who wears a plum-colored coat with shiny brass buttons; Rolly, a master of fisticuffs; and Pipp Horrican, a youth with a wispy mustache, piercing blue eyes, and an annoying pug. Ansovald recognizes Charlie from sideshow posters and understands his monetary value. 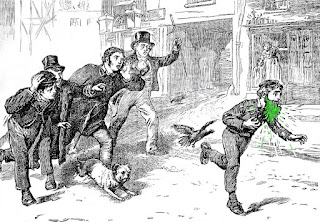 Carnies chase the sideshow escapee - The Wee Man of Darling

Altercation highlights: Shemp drinks everyone's dram in the commotion. Biltong skips out without paying his overdue bar tab. Jack puts the portly August on a whip leash and shoves a pistol barrel into the seam of the blustering gentleman's trousers. Ansovald is made a fool by his belligerent eagle refusing to attack Rolly. Rolly blackjacks the Greenman but ultimately the carnies back off. The factory workers have likely made a powerful enemy.

Once rescued, Charlie tells of how he got his beard (touching a glowing orb in the Iron Coral), how his parents sold him into servitude and separated him from his twin sister, and how his life now consists of getting beard hairs pulled out for the financial benefit of others. The workers decide to explore the Iron Coral for arcana, as they have until 1 pm the next day to get back to work. Their boss attends secret "star cult" rites in the wee hours of each Saturday, so shuts the factory down (other than hiring a crew to grease the workings) the next morning to give him time to recover. Charlie agrees to lead them to the place since it is on the way to his home town of Darling.

In the coral the crew find an underground tunnel with clear walls that look into the ocean, touch a glowing sphere that hurls One-eyed Jack against a wall, and fight a glittering woman who seems to guard a couple of handleless iron doors.

Highlights include Biltong falling down some wet stairs and Lemmy chucking his canary at a glowing cloud, and Jack sprouting a red, glowing, fleshy orb in his empty socket after being thrown into the wall by the sphere. The fight gets nasty as the woman is hard to damage, but seems to sap away the will of anyone she squarely hits with her sparkling claws. Lemmy's key is used first to try and turn the woman corporeal (a clever idea that failed) and then to bypass both doors. Several characters are overwhelmed by damage: One-eyed Jack (now Red-eyed Jack) and Lemmy both get taken out of the action. Lemmy manages to first pass his key to Shemp who recovers two gauntlet like arcana from the locked rooms. In the fight, Biltong tries putting on both gauntlets and smashing them repeatedly into the woman. They trade blows until the woman explodes - her glittering form dissipating into the air of the room.

After getting the injured back on their feet the crew return in time for their next shift, but tired, drained, and hurt as they are, several pick up "demerits" for their lackluster performance on the job. (Current demerit count: 2 for Biltong and Ansovald. 1 each for Shemp, Lemmy, and Jack.