The mad prophets have sentenced me to walk the Eternal Caverns of Urk until I receive a vision from the First God. I fear I will not return, and if I do I may be no longer sane.

[This is a solo play narrative, making use of Nate Treme's Eternal Caverns of Urk zine. My character is Kesh the Domite. HP 10, Brute 0, Skulker 1, Erudite 2. Items: mirror, flask, cloak uneven gray. I tried to stay in first person in this narrative, but probably messed up some.]

Beneath a merciless noon sun I stare into the dark, cool void of the cavern's mouth. The rock in this region is chalky, formed into great boulders and plates of rainbow hues. Black moss coats the entrance. I remind myself that I have been commanded to enter, but my feet are unwilling for the moment. I check the meager "gifts" I was given when parting from the prophets, the only things I was allowed to bring: a flask of clear liquid (water?), a small mirror, and the strange cloak of striated gray that they insisted I wear despite the heat.

I step inside. The air is cold and mildewy. I will soon be grateful for the cloak I think. And the use of the water seems obvious enough, unless they have given me poison, or more likely some form of dream nectar. What of the mirror? Of what possible use could that be?

I walk for some hours, leaving the light behind me. Moving in total blackness by the touch of my fingers on the wall I begin to think I can see floating lights. At first I am convinced they are random flailing of my optic nerves, but they resolve into softly glowing eyeballs the size of beer barrels.

At first I am too terrified to move, but they keep their distance. Watching. One of them bounces and gyrates in a crazy motion, never breaking its steady gaze upon me. I walk forward, but this seems to displease the eyes and they bar my way. Another eye then takes up the crazy looping antics of its peer, but with a sinuous grace in place of the frenetic hopping. When it stops I start to walk forward again, but quickly see them draw together. So I imitate their ritualistic dancing with some moves of my own. Katas I learned from my youth. Concentrating on my breathing and execution to calm my fears, I go through the 39 stations of the most complicated routine I know.

[This is the first roll I made other than generating random stuff. Turns out these giant eyes were into dance battles. I got by with a 10, including a +1 from Skulker.]

The eyes glisten around me. Then they all weave and bob excitedly, looking at each other as much as me. And for a miracle they arrange themselves in a broken line ahead of me, softly lighting my way.

And I go forward.

The cavern is wide here. Filled with strange yellow fungi, faceted like gems. Their geometry seems something more than random and I contemplate them for some time. The air here has grown warm and humid. And glowing drops of water fall form the ceiling in a florescent rain. Parched, and unwilling to drink from my flask, I decide to accept this unnatural water instead. I point my face toward the cavern ceiling and drink.

My heart freezes as I see a flabby mantis clinging to the ceiling above, thorny forelimbs reaching toward me. Had I not looked up ... I shudder to think.

I tuck and roll forward into the yellow fungal "trees" as the mantis springs forward and down. [Roll+Skulker, Success - barely] He misses, but quickly recovers and scuttles across the ceiling, hunting me. The rectilinear blooms of the trees are between us, giving me cover. The mantis stops, seemingly befuddled, and stares in my direction with that strange pinched face. Suddenly there is a small voice ...

A voice in my head that is! "Come out little one. Show yourself to me. I am no threat to one such as you. We will be friends." 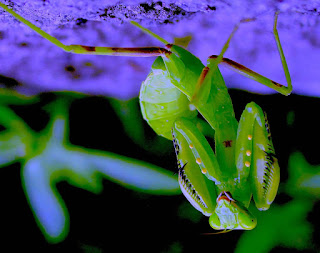 It's a soothing voice, but something tells me not to trust it. [Roll+Erudite, Success - barely]. I know better than to come out, but I find myself unable to move. I call out loudly. "Help!"

For some minutes the voice keeps trying to coax me from my spot. I bite my cheeks and pinch myself to keep it from soothing me into feeding myself to this psychic monster. After an interminable time, I hear soft, thumping footsteps. Then a loud crack and the mantis drops, almost on top of me, stone dead.

"I say. Come out of there young fellow. You can't go messing around with these Prizing Mantises you know. Dangerous stuff. Luckily I was returning from my hunt and heard your call. Come with me and we'll get you a stiff drink. I expect you could use one!"

I hear the fruity, mellow voice of this rescuer long before I see him. It's a rather nice voice and I stand up, revealing my location. "Thank the prophets that ... Oh, hi there."

I go a bit speechless at this point. Before me is an 8' tall fellow covered in pink fur. He is extremely round and a bit bear-ish, but with two short horns curving over his fuzzy dome. Despite his fearsome size, he somehow seems a bit comical to me, standing there in a fussily-stitched vest of green and holding the smoking barrel of some metal staff. Some instinct, however, tells me not to laugh. Bad manners I think – but it's more than that. I sense a vague danger. "Thank you for the rescue. And yes, I could use something to drink. How far is it to your home?"

He informs me that he and his people are camped just a few caverns further in. And that they would be welcome of some outside news. So I walk along with him, skipping to keep up at times. His gate is awkward but covers a lot of ground. As we walk, he prattles on endlessly about the flora and fauna of the caverns. As if educating me.

In fact he is telling me things I had no way of knowing ere now, but somehow it rubs me the wrong way. Like he is some pompous professor trying to fill my head with useless facts that he will test me on later. I try to listen, but I spend more time sizing him up than absorbing his words.

When we reach our destination, I am shocked at the level of comfort represented by something so hastily called a camp. Slender lightweight rods support gaily colored cabins of silk. There is a small fire, hardly needed for warmth here, but the flames are licking at pot of something that smells incredible! A spicy stew of some kind that promises to be both hearty and energizing.

[Took a break here for tonight. I think I'm in trouble as these fellows are into taxidermy.]