Well. This little solo-mapping-adventure game was a surprise. I've bought and played a number of solo games over the years. They often come in small formats, like zines, pocket-mods, or a few printable page spreads. Some are more workable, intuitive, and/or fun than others. I put this one at the top end of the ones I've played. After I've had my say on this one, I'll talk about a few comparable products. But before I go on, I don't want to forget to say that you can buy Delve and some of Anna's other games at Exalted Funeral Press. 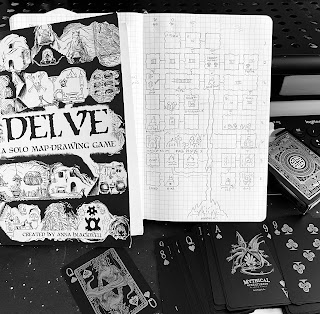 Delve is a 44-page game by Anna Blackwell. You can play it for a few minutes at a time, but a complete game will take hours to complete. It's very compact and satisfying in that regard. You just need some cards and pencil-and-paper (preferably gridded or dotted) to play. Anna suggests some tokens as well. I didn't use them because I was in a rush and wanted to get playing, but it would indeed be helpful during the combats.

But let me back up and start with a top down explanation. You are a the Overseer of a Dwarven Hold. Your king, the "Under-King," has tasked you with exploring the depths of the earth to find the fabled Void Crystal. The game proceeds in turns of 5 phases.

1. In the first phase, you explore. This means you draw a card. The suit will tell you whether you encounter more resources, trade goods, or encounter a natural wonder (often dangerous) or remnant (usually some kind of monster or other threat).

2. Once you resolve the card, you go into combat with any remnants uncovered. This only happens about 1 in every 4 turns and is resolved quickly. Your units move one chamber per turn, as do the monsters, heading for your hold entrance. (Sometimes the book will tell you that they do other things.) If you meet them in battle, you basically do attrition damage to each other, the winning side being reduced by the power of the losing side. There's nuances to that, but as a general description it works. And in play, it works. I kind of enjoy not rolling dice. As the Overseer you are managing a small army of soldiers and specialists. You can recruit more (see step 5). If the monsters make it to your entrance, your hold is a failure. You basically lose.

3. The third phase involves converting resources into trade goods or vice versa to set up for turn 4.

4. This is the phase where you build stuff. You get to build one room from a long list of rooms (barracks, forges, cannon outposts, hospitals, temples, etc.). You can only build one per turn, which is an important restriction. I often had enough resources/goods to accelerate things but couldn't because of this turn-by-turn development -- and I enjoyed that pacing mechanic. You also use this phase to make repairs to rooms that are damaged, build barricades and traps, etc. Again, all of this is spelled out. You look up what you want to build and the book tells you how much it costs, what it's strength in combat is (if any), and how it works.

5. Finally you recruit units. Some units require you to build special rooms first. (The book isn't always clear about this. For instance, I didn't see any where that you needed a special room to build cannons, but you need to randomly encounter a Golem Forge, and beat the golems there, before you can build golems.)

There's also kind of a phase 0 where you do upkeep on special rooms you have encountered. For instance, I had a crystal cavern that yielded trade goods each turn (for a while). I also, unfortunately, encountered a spooky carnival that made killer clowns after a run in with some "Bad Magic."

Why is that in quotes? Because you either earn or encounter magic in the game by recruiting clerics or running into things like magic wishing wells. Often you randomize what family of spell you get, good or bad, and then randomize which spell happens out of 13 (Ace to 10 + J, Q, K as a table). It's good fun.

The first time through I started playing immediately, as I was reading. I had fun, but I was sure I was making a few mistakes so my first map has about 21 rooms before I felt comfortable enough with the basic concept to stop and really read the book. There's about 18 pages of actual rules. They are fairly simple and procedural in a way so that they don't all crowd in on top of each other. The rest of the book is tables and such you will use during play, with a few sections of rules that trigger off when you get deep into the dungeon.

Honestly, while the rules are largely clear, and it's easy enough to work around what you don't understand, the organization isn't always great, some small bits of information are missing, and there are a few small things I would change. But by in large it is playable and REALLY FUN. I've been at it for hours now. My second map -- above -- is developing. I'm going to have to add pages, probably to get to the void crystal. I think the replay value is going to be pretty high.

One other minor complaint I have is that it seems pretty easy to stay alive. This may be intentional. Anna says it is supposed to be relaxing. And indeed I found it to be relaxing and fun, emphasizing exploration and discovery over other game modes. Still, I might read through the rules one more time to see if I'm making my troops more powerful than they should be or missing something about the strength rating of foes.

First of all, I don't know that Anna has seen or read How to Host a Dungeon by Tony Dowler, but this game is similar and really stands on the shoulders of HtHaD. I've not played the 2nd edition of Dowler's game, but my gut says I like the process of Delve better. That being said, HtHaD has been around for years and is an incredible game. As far as I know it was the first game of this type, developing a setting/world/adventure through procedural, randomized drawing prompts. You should take a look at it. Like Delve, it's a game where "you" are not a character, but rather an observer of the activities of surface races digging deep into the earth for treasure. You root for the "good guys" (sometimes!), but you are not "one of them."

In contrast, Four Against Darkness by Andrea Sfiligoi is a dungeon-exploring, drawing game where you are the party. (Not just a character, but a party of four.) Whereas Delve you theoretically play until your hold fails or you get the void crystal, and HtHaD you play until you have gone through all the "ages" of the dungeon, in FAD you get a strong push-your-luck mechanic. Your play sessions are about getting in, getting enough experience to level up, and getting the hell out before you die! It's a punishing game (in a fun way).