Literary Sources of Chaos and Law ... and Neutral?

The main sources for alignment concepts in the Appendix N are probably Poul Anderson's Three Hearts and Three Lions, Moorcock's Elric and Corum series, and Zelazney's Chronicles of Amber series. I have read all of these, with the caveat that I have only read four Elric books and three Corum books. For the most part, Neutral is not a force, but rather an in-between, a neutrality. The exception might be Moorcock's Grey Lords. (See quotes below; page numbers emitted because they were pulled from e-texts.)

“True,” Rackhir nodded. “Most recently we averted a threat with certain aid from the Grey Lords—but Chaos had caused the gateways to the Grey Lords to be closed to mortals. We can offer you only our warriors’ loyalty" (Stealer of Souls)

“Arioch!” Elric bowed his head before the Lord of Chaos.
“Aye, Elric. I took the demon’s place while you were gone.”
“But you have refused to aid me . . .”
“There are larger affairs afoot, as I’ve told you. Soon Chaos must engage with Law and such as Donblas will be dismissed to limbo for eternity.”
“You knew Donblas spoke to me in the labyrinth of the Burning God?”
“Indeed I did. That was why I afforded myself the time to visit your plane. I cannot have you patronized by Donblas the Justice Maker and his humourless kind. I was offended. Now I have shown you that my power is greater than Law’s.” Arioch stared beyond Elric at Rackhir, Brut, Moonglum and the rest who were protecting their eyes from his beauty. “Perhaps you fools of Tanelorn now realize that it is better to serve Chaos!”
Rackhir said grimly: “I serve neither Chaos nor Law!”
“One day you will be taught that neutrality is more dangerous than side-taking, renegade!” The harmonious voice was now almost vicious.
“You cannot harm me,” Rackhir said. “And if Elric returns with us to Tanelorn, then he, too, may rid himself of your evil yoke[…]”
(The Sleeping Sorceress)

This is a kind of straw argument, but if you search the wikipedia page on Elric you get 13 mentions of Law, 28 of Chaos, and 0 mentions of neutral or the Grey Lords. IOW, the works are focused on the former two and the latter, neutrality, is almost an afterthought or just natural byproduct of the dichotomy (anything NOT Law or Chaos).
Given this, one wonders why Gygax posited a Neutral alignment language. But I've probably already said enough about that in my previous posts.

My friend Aonghais (who also dug up the quotes above for me) reminded me of this attempt at universal language. It hit a nostalgia chord with me as I was once an avid reader of Harry Harrison's Stainless Steel Rat series. In that fictional world, Esperanto is the galactic common.
I think the efforts of linguists to create a universal language of some kind teaches us something. Such efforts always (or at least have always) failed. Why? Because language is political. Let's start by recognizing that some languages might be superior to others: more normalized and rational in construction but also with a depth and sophistication. Even if we could all agree on which language is the "best" – which of course we can't – it wouldn't mean that everyone would rush to learn and speak it.
There's lots to say here, but it has been said by others. We all recognize the fact that language is used to create borders, to mark insiders from outsiders, to force allegiance. We can look at both noble and not-so-noble manifestations of language wars: like the efforts to retain French as the native language of Montreal, Quebec, or the bigotry espoused by songs like "Speak English or Die!" by Stormtroopers of Death. It's a thing, and we all know it.

In the comments on my previous Common Is... post, Ron Bishop said "Andre Norton utilizes this limited common tongue concept in her Beast Master stories. Terrans and Norbies communicate through a limited "finger talk" since Norbie vocalizations sound more like birds."
In other discussions I've had on social media about Common and alignment languages, gamers have indicated similar interpretations.
"I always thought alignment language was like how Italians can talk with their hands and tattoo people have this inside thing."
"I’ve always understood alignment language to be more akin to unspoken like body language or maybe more what is talked about."
This is an interesting take. Of course hands might vary as much as mouths. Can two races share a hand-language if one has 5 fingers and the other 6 or 4? It's a viable alternative for your game world though. If we assume some kind of convergent evolution around 5 digits (which does seem to happen in our own reality), a sign language would have more universal potential than a spoken one.
I've thought about interpreting alignment language this way: as a set of culturally-shared memes. Like, in America, if you go up to someone and say "Peace be with you," you will know they are Christian (or perhaps just certain sects of Protestant) if they say "And also with you." If you say "Darmok and Jalad at Tanagra" to someone, you will know if they are a Trekkie. If you sing "My Bologna has a first name" any American over 50 will find it hard to resist singing back "It's O-S-C-A-R." We have all kinds of insider languages that aren't true languages. Functionally, though, it's clear that D&D alignment languages are listed alongside real languages, unlike Thieve's can't, which is delineated as a kind of slang of words and symbols. There's no evidence that they were intended to be used this way – not that anyone (including pre-1977 Gygax) would care. Your game; your rules.  [This was wrong. See below.] 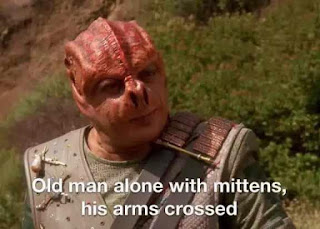 I Missed the Mark

Alignment language is a handy game tool which is not unjustifiable in real terms. Thieves did employ a special cant. Secret organizations and societies did and do have certain recognition signs, signals, and recognition phrases — possibly special languages (of limited extent) as well. Consider also the medieval Catholic Church which used Latin as a common recognition and communication base to cut across national boundaries. In AD&D, alignment languages are the special set of signs, signals, gestures, and words which intelligent creatures use to inform other intelligent creatures of the same alignment of their fellowship and common ethos. Alignment languages are NEVER flaunted in public. They are not used as salutations or interrogatives if the speaker is uncertain of the alignment of those addressed. Furthermore, alignment languages are of limited vocabulary and deal with the ethos of the alignment in general, so lengthy discussion of varying subjects cannot be conducted in such tongues.

It goes on. And on. But it's all interesting. It's clear that by 1978 Gygax had thought about alignment languages in some detail. Oddly none of this is even suggested in the PHB. My fault for assuming it would be and not checking the DMG before.

The point is if you are playing AD&D 1e rules-as-written you have a strong guideline for how to treat alignment languages. It also means that my own interpretation runs a little counter to those guidelines based on my own assumptions and interpretations of material leading up to the DMG.