Words of Power, Chaos and Law as Weaponized Speech

[Please note. I edited my last article after discovering a section in the 1978 DMG that I had previously missed on alignment languages. Essentially I crossed out the last few sentences and wrote a small, new section after the image in the article. The gist of it is that Gygax does define alignment languages as a set of signs, gestures, phrases with a limited range, similar to Thieve's Cant. It's an explanation that is somewhat late to the game, literally, being written four years after the original rules. Perhaps it appeared in Dragon previously; I'll have to look that up. Even so, it's the "official explanation" of 1e AD&D. Notwithstanding, I am on a kind of roll, and I want to continue thinking of them as a kind of gifted language.]

I'm continuing to experience thoughts on alignment languages in D&D. This round I want to talk about speaking alignment language as an act of power. Inspiration came in the form of a response to an earlier post:

I think I can safely say that in the Midwest during the 1970s, everyone assumed that the Chaotic alignment language was the Black Speech of Mordor. Rightly or wrongly, Tolkein had an unbelievable huge impact on everyone's campaign. The early Judges' Guild products are a good examples.

Yes! This thought occurred to me at one point in my earlier writing and I lost it. So I am indebted for Grymlorde for both reaffirming it and returning it to my mind. When Gandalf makes the faux pas of reciting the Black Speech from inside the one ring aloud at the council of Elrond, a shadow passes over the sun, everyone trembles, and the elves stop up their ears. Later, as the fellowship attempts to cross Caradhras the Cruel, Gandalf rattles off a fire spell and two things happen, only one of which is the intended effect of the spell:

Gandalf himself took a hand. Picking up a faggot he held it aloft for a moment, and then with a word of command, naur an edraith ammen! he thrust the end of his staff into the midst of it. At once a great spout of green and blue flame sprang out, and the wood flared and sputtered.

"If there are any to see, then I at least am revealed to them," he said. "I have written Gandalf is here in signs that all can read from Rivendell to the mouths of Anduin" (The Fellowship of the Ring). 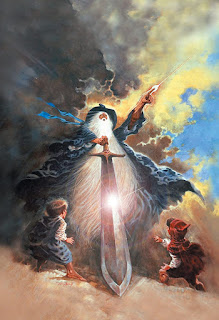 Art for the Bakshi Lord of the Rings
movie poster, by Tom Jung (I think)

Here's how I might handle it at my own game table. Taking cues from Tolkien and dialing things up to 11, I would say that speaking an alignment language reveals not only your alignment, but may reveal your presence to enemies. Second, hearing an alignment language that you don't understand causes you immediate discomfort and, if prolonged, real physical and/or mental wounds. The latter would especially be true if you were of the opposite alignment.

This treatment makes alignment languages feel powerful! And it keeps them from being a kind of shortcut. Theoretically, if there are no ramifications, a party consisting of characters from each alignment could converse with almost any intelligent creature in its alignment tongue. Despite Gygax's suggestion in the 1e AD&D DMG that one never flaunts their alignment language for reasons of secrecy and social pressure, many a player has remained undaunted by peer pressure inside the game world! Conversely, eliciting dangerous attention from the powers-that-be and causing pain to creatures of another alignment would be a good deterrent.

It could also be weaponized. If a party entirely consisting of lawful characters spoke Law in front of a gaggle of chaotic drow, they could slip in some extra damage. But it's a slippery slope, as they could also draw more agents of Chaos. It's more likely that weaponized language would be abused by the GM; having evil persons speak Chaos to cause damage to Lawful characters, under the assumption that there creatures safe in their stronghold of chaotic or neutrally aligned creatures, would worry less about drawing the attention of Law. It's likely, however, that this problem would be checked by two factors. 1) The GM really has infinite power and could kill characters any number of ways, so another trick doesn't really make things worse. The real limit to a GMs power is the tolerance of their friends. Rough handling and unfair practices leads to an empty table. 2) Chaos doesn't necessarily want to draw the attention of Chaos. The same might be true of Law. Not all agents of each faction are united in purpose.

All of these thoughts are leading up to a kind of setting document that I will produce as a summary of my own preferences. None of this (and I hope this has been understood) is prescriptive or didactic. I am following my own ideas, interpretations, and preferences. If yours differ, please follow them to your own conclusions. The real value of these articles, I hope, is to get people to think more about alignment languages and Common.