John Gregory's Low Country Crawl zine presents a small fantasy setting inspired by the geography and folklore of the coastal, southern United States. In a word, it is excellent.

The physical product is 32 pages (counting the cover). The color cover and black & white interior feature period-appropriate public domain art, with a few extra pieces contributed by Charles B. F. Avery. I really like the overall feel and layout by David Schirduan. My only complaint about the book is the thinness of the cover (same as the interior paper weight). On the other hand, it seems to be holding up well (no dinged corners yet) and it gives the zine a nice flexible hand feel that a cardstock cover does not. I bought my copy from Spear Witch. 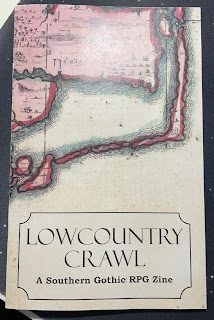 The zine is close to system-agnostic, with only fairly broad pointers at something akin to Oe or Basic D&D. For instance, creature stats list defense by comparative armour type and damage by comparative weapon type. The only hard number I see is Morale.

The first section is a really nice overview of the geographical nature of the barrier islands - a coastal where fresh and salt waters meet and islands come and go due to erosion or agglutination of material. This section includes a generator for islands by size/type and ends with a nice encounter table that cleverly divides the day into six four-hour shifts.

The second section is an 'island crawl' featuring a few islands and sites on them. There isn't a lot of detail here, just quick descriptions of places, each with some goings-on and story hooks. A small site-map or two would have been nice here, but it has plenty to go on for a number of sessions, given a reasonably creative GM. 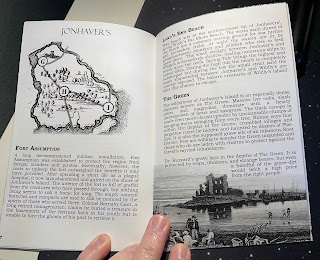 The third section is filled with creatures and items. This, and the opening section, are my favorite parts, with the middle section really being an example of how the two go together in an adventure context. I love the folkloric nature of the monsters: e.g. the gray man, rawbones, and boohags. Really, really well done, atmospheric, and "different" in a way that we don't really see much of. I mean, there are a million bestiaries out there. Many of them stem from the gooey, weird, Geiger-ish drawings that fascinate people and are just shooting to be weird or shock. Nothing wrong with those, but as many GMs will tell you - the real world is weirder than anything you can make up. And here we have an example of really strange monsters with interesting motivations that are drawn straight from the collective subconscious of a group of people. Very much nails the southern gothic vibe. Ditto for the items, like a pouch of sticky chewing tobacco that can be spit as a type of web-weapon.

All in all, a great zine and a great read with a really authentic geographical vibe. I suppose I should note two things. 1) The book isn't really divided into three sections, the table of contents lists four and it feels like there are more headers than that. Three sections is just how I perceived it when reading. 2) Though this really nails the feel of a region, it is divorced from actual historical, named people or places in such a way that it could be used with nearly any world or system.