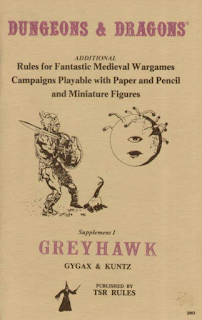 I both love and hate this book.

As the first "supplement" to the original D&D it did a lot of things to the game I don't love. It introduced complex multi-classing. (Though the fighter-mu elf was around in vol 1, we now have multiple species/class configurations and even three way splits like fighter/magic-user/cleric.) It brought in the half-elf. It introduced the thief and percentile rolls. It suggested the idea of chaotic player characters and parties prone to back-stabbing each other over treasure. It introduced variable weapon damage and monster damage. (Most people would say this is a good thing, but I've come to love the simplicity of d6 damage.) In general it just added more classes, more options, more spells, more ... and the rules complexity rises dramatically. This is where D&D became AD&D, honestly.

So what about the stuff I love?

1. This is where some of the most iconic monsters were born. The rust monster, owl bear, displacer beast, beholder, umber hulks, blink dogs, carrion crawlers, gelatinous cubes, etc.

2. This is also where Gygax introduced the metallic dragons and gave them a king to oppose the chromatic dragons and (also added in this volume) their five-headed queen. No names for these royal dragons are given in Greyhawk, BTW. That comes later.

3. This is where many of the iconic magic items were born, such as the Deck of Many Things. Some fo them were quite broken, but the level of creativity on display is really high!

4. The suggestions for changing up dungeons ... Gygax's inventiveness is really on display here. So many crazy ideas! "Room complexes with are all parts of a monster. The first room being the mouth, The next the stomach, and so forth." "A Troll with a magic spear riding a Purple Worm." "Skeletons who are able to hurl their finger joints as if they were magic arrows." "A seeming Golden Dragon which is actually mobile Yellow mold."