I made a quick dungeon (maybe took 30 minutes?) using the method described in this brilliant post: Adrenaline and Spark Tables Dungeon. In short, the method imagines a dungeon as something with a theme, dressing, and rooms - and rooms as having a type with an active and passive element. You make tables for these things. Here are mine, and I will tell you that all of the skill (at least for me) was in making these tables and I could definitely get better at it. These worked, but after making one dungeon I understand better how to make the next tables.

Title: (first thing that came to my head) The Cellars of Mad Vortigern

d6 Active Elements
d8 Passive Elements
Here is the result - don't bother trying to read my notes, I included a key below. The ideas kind of took on a life of their own as I detailed the rooms. I ABSOLUTELY used the tables, but as a jumping off point. A few new table/dressing words occurred to me as I wrote. 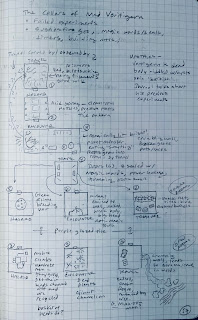 Upstairs - you find the body of Mad Vortigern. He is slumped over his desk, on which is a kind of logbook with watering schedules, measurements, strange arcane formulae, etc. Sketches of strange flowers, and in one instance something that looks more humanoid (but definitely isn't human) make your skin crawl. Vortigern's body is covered in ulcers. If cut open his body is filled with a fibrous material and cysts/pods instead of organs. (It should definitely be burned!)

Room 1 - This room is at the bottom of a set of stairs leading to the house "cellar." Upon touching the bottom step, magic, flickering white light issues from a square in the ceiling. (I'm imagining ever-burning torches in a recess with leaded glass panes below them?) This room is covered in red tendrils like veins or thin plant roots. A sickly sweet smell hangs in the air. If PCs dally or lean against the walls, tendrils will try to attach to them and drink blood. Pulling away makes a terrible "velcro" sound. This isn't a significant threat unless someone passes out here - just a hint of things to come. There is a hidden tunnel behind the thickest mass of tendrils, It is a tunnel leading to room 3, but you would need to burn it out or hack through it to travel the distance.

Room 2 - This is a disinfecting room. Brightly lit, glazed blue tiles, odd pipes/nozzles along either side. The floor tiles contain pressure plates that will spray the characters with acid. The acid degrades nonmagical metal; Amor loses one step of functionality (e.g. Plate to Chain). With care, PCs could move against the wall and not trigger the spray.

Room 3 - As soon as PCs open the door, they will se a giant pitcher plant. They may indeed hear "sucking" noises before opening the door. The giant plant is in the process of devouring something. All that is left is a kind of goo, but it has an eyeball in it and maybe a hand? The red root tendrils clearly come from this thing and they fill half of this room as well. The other half is filled with tables, pots (many broken), sacks of dirt... There's a door at the other end.

Room 4 - This is a room of doors, six of them in fact. Three are closed and sealed with wax as well as arcane marks drawn in grease pencil. There is an ozone smell in the room and a soft humming (the wards are leaking).

Room 5 - (sealed) This is a green slime breeding vat. It is dark, light only coming from 4. A vat in the center of the room holds spores that have fallen from the ceiling above. It looks like bodies might have been thrown into the pit to feed the slime. Might even be some treasure down there, stuff the bodies were wearing, but one might also presume they were stripped first. Occasionally a soft squelching or a popping sound from the pit.

Room 6 - (sealed) A naked human (?) is chained to the opposite wall. It is nearly starved to death. It's body is small and weak, especially compared to its giant bald head and large eyes. The room is unlit. Dried feces, bad smells, and all the other yucky stuff you might imagine from someone imprisoned without care for a few days. The human is harmless, but he has been altered. His touch negates magic (magic items get a save).

Room 7 - (sealed) A second 'seal' on this room is a blue, floor to ceiling, interwoven vine. Behind it are treasure chests and barrels. This is Vortigern's vault (might even be inventoried in his logbook). The plant is charged with electricity (like a vegetable version of an electric eel). If touched with skin or metal ... Zzzzzt.

Room 8 - There is a crazy machine in here. It hums away. A bed of dirt grows wiggling mandrakes. As PCs watch, one pulls itself free of the dirt and wanders around. On one side is a pit, and when the mandrake falls into it there is a sharp clipping sound and a horrible scream. The head rolls into a basket that is half full of heads already. The rest is ground in a chipper shredder thing and sprayed back out onto the growing mandrakes. Something like that. Add details to suit. Do the heads do anything? The fresh one will probably try to bite anyone reaching in.

Room 9 - This room is full of dead tree-like plants in giant pots. There is a giant stick bug or chameleon in here. It is hungry. Probably came in through room 10.

Room 10 - This room has a bedroll and chest with some meager personal treasures in it. A crumbling wall leads out to a small cave near a babbling brook, the entrance well hidden behind trees. There's an 80% chance a rogue is here. He wandered in from the outside, looking for a hideout. But the place has twisted him. He is part mushroom man and has grown huge. It's hard for him to go out of the tunnel even, but he stays here, preferring the dark. Is he violent? I dunno. He's moody. Roll reaction, he will either attack, cower, or ask for help.

General - most things are potentially infectious. A lot of stuff might be valuable to the right buyers.