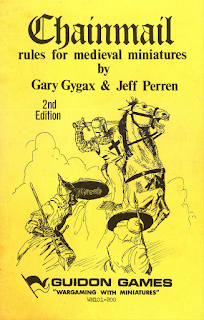 I have no agenda here and no desire to be thorough. I'm just revisiting these old rules, some of which I've never really read before and making comments on things that interest me. Maybe they will interest you too.

It's cool that in 1972, Gygax had already formulated the five (plus one) colors of dragons and their breath weapons that figure so prominently in Dungeons & Dragons as the "chromatic dragons."

"We will deal her with the great Red Dragon (Draco Conflagratio, or Draco Horribilis) which is typified in Tolkien's THE HOBBIT. [...] Their most dreaded weapon is their fiery breath" (31).

"Other kinds of Dragons can be introduced into games, if a little imagination is used. White Dragons live in cold climates and breathe frost. Black Dragons are tropical and spit caustic acid. The Blue variety discharges a bolt of electricity. Green Dragons waft poisonous vapors--chlorine--at their opponents. Finally, the Purple, or Mottled, Dragon is a rare, flightless worm with a venemous sting in its tail" (32).
My friends and I discussed this a bit. Red, green, and white dragons can be seen in Western art as far back as the 12th century. Chinese art featured dragons of other colors: black, white, gold... And there are some precedents in fantasy literature before Chainmail. Specifically I am thinking of the green, blue, brown, bronze, and gold dragons (also the singular white one) from Anne Mcaffrey's Dragonriders of Pern, the two novels of which was published in 1967. But this formulation, with its five colors and five types of breath weapons, I believe, originates with Gygax.

Note the reference to The Hobbit. Those who dismiss Tolkien's influence on Gygax would do well to have a glance at Chainmail. Here are relevant snippets:
Regarding orcs. Many will try to argue that this is a generic term, and now it is. However, prior to Tolkien it barely existed as a word, and it wasn't specifically equated to what we think of as an orc today. Chainmail notes that orcs are "nothing more than over-grown Goblins." They are "quarrelsome and factious. According to the best authority, there are at least five kinds (tribes or perhaps clans) of them. These are 1) Orcs of the (Red) Eye, 2) Orcs of Mordor, 3) Orcs of the Mountains, 4) Orcs of the White Hand, and 5) Isengarders." Might as well specify "Misty Mountains for the third clan, since this division is clearly from Tolkien's Lord of the Rings. Further, Gygax notes that both orcs and goblins "do not like bright light" and have penalties to attack and morale in full daylight or bright light. In all points parallel to Tolkien's mythos, we few if any dissenting notes.

Ent is also an older word, but it just meant "giant" before Tolkien. Clearly the Tolkien version is used in Chainmail. I might even argue for the inclusion of Giant Spiders in Chainmail as a Tolkien reference as I can't remember any such creatures in folklore; but I'm sure that's my own failing and imagining a giant anything-scary is easily done without the help of Tolkien. Wraiths, elves, goblins and other creatures also found in Tolkien's work appear in Chainmail but with no obvious shade or reference that would point at Tolkien's influence.

Gygax can claim that D&D wasn’t all that influenced by Tolkien ... but he also infamously didn’t give Arneson much credit either. I think when we look at D&D proper, we will see a number of these influences recur.

The reliance on Tolkien is also highlighted by there being far fewer references to other writers by name or IP. Howard/Conan is mentioned a few times and we get this nice tip of the hat to Poul Anderson.

"What are generally referred to as Trolls are more properly Ogres--intermediate creatures between men and Giants. [...] True Trolls are much more fearsome beasts (see Poul Anderson's THREE HEARTS AND THREE LIONS)."

(If you have never read that chapter, you should. D&D trolls are absolutely drawn from Anderson's work and not from Tolkien. And I think that Gygax is making the point here by essentially saying that Tolkien's trolls were more properly ogres.)

Elric and Moorcock are not referenced until the subject of "Combination Figures" is broached. "A good example of this is Moorcock's anti-heroish "Eric of Melnibone," who combines the attributes of the Hero-type with wizardry, and wields a magic sword in the balance!"
Of course not every monster type is from Tolkien, but those that aren't are suitably generic. We don't see the flying monkeys of Wizard of Oz, for instance.

Much of what Gygax imagined for wizards in Chainmail was passed on to Oe D&D, though some of their assumed abilities later became spells (e.g. invisibility and protection from arrows) and some just didn't make it outside of the fighter-wizard elf.

"Wizards can become invisible and remain so until they attack, they can see in darkness" and "can throw either of two types of missile:" fire ball and lightning bolt. They also are fairly good at fighting, being worth "two Armored Foot" and able to "handle magical weaponry." They "are impervious to normal missile fire." (28) Other spells listed are Phantasmal Forces, Darkness, Wizard Light, Detection, Concealment, Conjuration of an Elemental, Moving Terrain, and Protection from Evil" (28-29). "In order to cast and maintain any spell, a Wizard must be both stationary and undisturbed by attack upon his person" (29). "The power of the magic user determines the number of spells he is able to manage." (Range is also relative to their power.)

I particularly like the inclusion of duels or counterspells in Chainmail and wish that had carried forward to D&D more explicitly. 5e has done a pretty good job with it, I believe.

"If there are two or more opposing Wizards, and the game is not a recreation of a battle found in a novel, determine which is the stronger magician (by casting dice if necessary). The stronger magician can successfully cast a counter-spell with a two dice score of 7 or better, while a weaker magician needs a score of 8, 9, or 10, depending on his relative strength. A counter-spell fully occupies a magician's powers."

These happen specifically when a wizard is struck by an enemy spell-missile, or when a heroic type of major monster is struck by a spell. Chainmail seems to make a distinction between wizard missiles and wizard spells, e.g. "Wizards can [...] throw deadly missiles, and Wizards cast terrible spells" (28). Could this wording be the origin of the later spell "magic missile?" Anyway, saves are first expressed as a response to the fire ball and lightning bolt spells.

Dragons and elementals work differently; they don't get a save. Rather, they are driven back 1 space: dragons by any magical missile, air and water elementals by a fire ball, earth and fire elementals by lightning.
What happens to other figures that fail their save? They die, of course. This isn't an adventure game; it's a miniatures game.

Chainmail sets up the three-part alignment structure of D&D by providing creature type/army lists for Law, Neutral, and Chaos. This section is prefaced by the words: "It is impossible to draw a distinct line between "good " and "evil" fantastic figures." Instead Gygax leans on authors like Anderson and Zelazny for a different continuum. I personally like moving away from modern notions of morality and, having played some in this simpler mindset, prefer it greatly to the nine-point system.

While I did read through all of Chainmail, I'm really only commenting on the fantasy section here, as it relates to D&D and Gygax's influences. The rest is pretty cool, for its time, and maybe others more steeped in the history of miniature warfare could comment on its originality.
One thing worth noting is the possibility that Gygax got hold of, or heard an account of, Len Patt's scenario rules for The Battle of the Pelennor Fields, as played at NEWA in October 1970. Jon Peterson tells the tale in his blog.