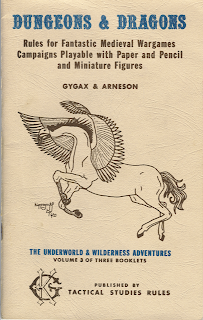 I am reading my way through original Dungeons & Dragons, having started with the 1972 printing (2nd edition) of Chainmail, and specifically the fantasy chapter therein. I have no agenda or desire to be thorough; I'm literally just commenting on things I find interesting; hopefully you will find them interesting too.

EGG crosses himself a bit in the introduction to Vol 3 where he says you should "construct at least three levels" of your dungeon before play. In Vol 1 he says that in preparation for the campaign "the referee must draw out a minimum of half a dozen maps of the levels of his 'underworld.'"
Check out the level of mapper-paranoia in his sample dungeon level. Holy cow. Slanting passages (with no purpose other than to confuse mappers), rotating rooms, one-way and two-way teleporters...

SAMPLE MAP OF UNDERWORLD LEVEL [...]
1. Note stairs down lead through blind passages and return to circular room with wedge-shaped divisions. Unless secret door is located this area will lead nowhere.
2. This is a simple room-labyrinth, generally leading nowhere, but “A” would be a room containing a monster and treasure, i.e. let us say “4 ogres with 2,000 G.P. and 1 magic potion.”
3. This area simply illustrates the use of slanting passages to help prevent players from accurately mapping a level (exact deviation from cardinal points is quite difficult for them to ascertain).
4. No matter which way west players move they will end up turning into the lair of the monster “B,” let us suppose a basilisk. There is a false door in the second passage north. The tunnel to the east contains a trap, “C,” a slide to a lower level which is disguised as a set of up stairs.
5. The combinations here are really vicious, and unless you’re out to get your play- ers it is not suggested for actual use. Passage south “D” is a slanting corridor which will take them at least one level deeper, and if the slope is gentle even dwarves won’t recognize it. Room “E” is a transporter, two ways, to just about anywhere the referee likes, including the center of the earth or the moon. The passage south containing “F” is a one-way transporter, and the poor dupes will never realize it unless a very large party (over 50’ in length) is entering it. (This is sure-fire fits for map makers among participants.)
6. Again, here are a couple of fun items to throw at players. “G” is a shifting sec- tion of wall, with a secret die roll to determine which way it will go: 1 = N., 2 = E., 3 = S., 4 = W., and 5 & 6 it stays put! Such a section will possibly close one of the four corridors, possibly blocking access to/from the trapdoor located in the room 20’ square located in the northwest. Point “H” is a two-way secret door. On an odd die result, let us suppose, it opens on a room to the west. Oth- erwise it opens on a passage south. The same trick can be used with staircases, having them go up or down at random.
7. This is the nexus for a modular section which will revolve at random periods. Although the passages north, south, etc. will always remain the same, the areas 10’ × 20’ beyond will be different at various times. Again, this will frustrate those setting out to map a level. All round rooms must not be nexuses. However, the circular structure in example 1. could, with a bit of alteration, be made into one, as could any room of any shape, providing the modules were properly designed so as to rotate around it.
8. Note the pit (X) at the four-way intersection containing a secret door on its south surface. A small tunnel will lead discoverers to the room containing mon- ster “I” . . . a true troll or two perhaps. The western portion contains the room of some evil man, complete with two secret doors for handy escape. There is also a flight of stairs leading down. Falling into the pit would typically cause damage if a 1 or a 2 were rolled. Otherwise, it would only mean about one turn of time to clamber out, providing the character had spikes or associates to pull him out, and providing the pit wasn’t one with a snap-shut door and the victim was alone. (5)

To be fair, on the next page he describes using tricks like this instead of deadly traps (30' drop, or spiked pit) because they mess with characters but don't kill them. He talks about both a threat of death and survivability being necessary things to balance.
I don't know about you, but I might rather my character fall into a pit and die than endlessly wander around these passages "to nowhere."
I do like his emphasis on verticality: chutes, slopes, etc. that take you up or down. I like this thought. Too many modern dungeons are linear because they don't provide enough of these level jump-offs. I suspect it's also because his dungeons were re-used many times, so players needed a way to navigate down quickly.
Also worth noting, I don't think he cared about player knowledge. If your character learned something but died, you probably played your next character with the dead one's knowledge. OTOH, the GM probably changed the location of the stairs.

FYI. I have noted before the absence of the war hound in the equipment list of OSE. It's also not in Oe. I believe the first time it appears is in AD&D, where you can buy a hunting or guard dog. (You can also buy a cow or a pigeon, among other livestock, if you want.) This comment isn't related to where I'm at in Oe. It just occurred to me to hunt this down for some reason. It's possible an expanded equipment list appears in one of the Oe supplements I haven't read yet.

Check out this paragraph, especially the last sentence. Seriously? I recruit a monster and it loses infravision. Cough ... bullshit ... cough.
"In the underworld some light source or an infravision spell must be used. Torches, lanterns and magic swords will illuminate the way, but they also allow monsters to “see” the users so that monsters will never be surprised unless coming through a door. Also, torches can be blown out by a strong gust of wind. Monsters are assumed to have permanent infravision as long as they are not serving some character" (9)

"As a general rule there will be far more uninhabited space on a level than there will be space occupied by monsters, human or otherwise. [...] It is a good idea to thoughtfully place several of the most important treasures, with or without monstrous guardians, and then switch to a random determination for the balance of the level. [...] Roll the die for every room or space not already allocated. A roll of a 1 or 2 indicates that there is some monster there. [...] Roll again for every room and space. A roll of 1–3 in those rooms or spaces with monsters in them indicates some form of treasure is present. A roll of 1 in a room or space which is unoccupied indicates that there is some form of treasure there" (6-7).
This placement advice is something I have seen from EGG many times. Also the notion of empty space within a dungeon. More modern modules rarely have more empty space than uninhabited space, let alone "far more." Why? Empty space is boring. And if we are concerned with realism, then why do monsters lose infravision when you recruit them?
Correction. Empty space can be boring. It takes more work to make it interesting. But then, is it really empty? Is a rotating room that is empty the same as an empty room? (Is that a Zen koan?)

The Example of Play completely glosses over a combat with the words...
"(Here a check for surprise is made, melee conducted, and so on)" (13).
The example, about two pages long, is largely about exploration and only the GM rolls - except, we assume, during the not-described combat. Also, he simply tells the party that the boots they found are "Elven-type" (indicating they are magic without the need for research or an Identify spell - which doesn't exist in Oe anyway).

I love this bit of appropriation. I mean, could a game publisher use this tactic now? I'm sure AH didn't mind because it sold more copies of Outdoor Survival.
"OUTDOOR SURVIVAL has a playing board perfect for general adventures. Catch basins are castles, buildings are towns, and the balance of the terrain is as indicated."
I didn't really think much of the Outdoor Survival map until I made the substitutions Gary suggested. 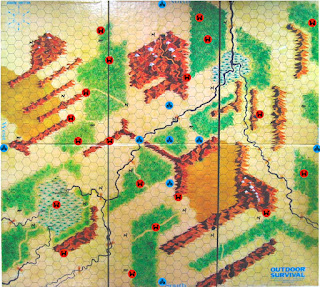 Castles in red, towns in blue. That's a LOT of castles. I would maybe back that off to 50% or less. But it completely changes the scale of the map. Before, the buildings were literally hunting lodges. And the catch-basins are small lakes/ponds. I guess that's Blackmoor off to the left, in the swamp. LOL. Pretty cool idea, actually, to repurpose a nice hex map (15).