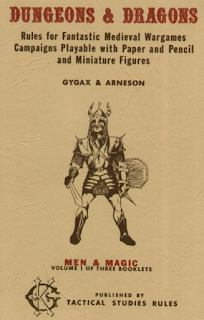 I am reading my way through original Dungeons & Dragons, having started with the 1972 printing (2nd edition) of Chainmail, and specifically the fantasy chapter therein. I have no agenda or desire to be thorough; I'm literally just commenting on things I find interesting; hopefully you will find them interesting too.

Gygax does not include any form of Appendix N in the original edition -- abbreviated Oe from here on, in reference to the three little books published in 1974 that came as a box set with a faux woodgrain wrapper. He does, however, write this in the Foreward.
"Those wargamers who lack imagination, those who don’t care for Burroughs’ Martian adventures where John Carter is groping through black pits, who feel no thrill upon reading Howard’s Conan saga, who do not enjoy the de Camp & Pratt fantasies or Fritz Leiber’s Fafhrd and the Gray Mouser pitting their swords against evil sorceries will not be likely to find DUNGEONS & DRAGONS to their taste" (3).
(Note, page numbers refer to the WotC reprints.)
Gygax was reportedly not that into the works of Tolkien and the influences came into D&D through other people. That's the story often told, but it relies on hindsight. I think we saw in Chainmail that either Gygax was well-influenced by Tolkien or by the miniatures rules set of Len Patt. Either way it doesn't reflect all that well on him because it means he is not giving proper credit to Tolkien and/or Patt. But in any case, I think he does do a good service to D&D by walking it away from what could have been (and sometimes is) an overbearing influence on modern fantasy. Here he sights some interesting examples, and being few in number I think we have to take them pretty seriously.
I've read a lot of the works Gygax later references in Appendix N, including most of the work by Leiber, Burroughs, and Howard. (The only de Camp I've read is The Fallible Fiend and I haven't touched Pratt.) As with most Appendix N stuff, the quality varies wildly. You have to pick and choose works or even chapters/tales if you want to avoid the worst. And those readers with zero tolerance for outdated mores that either border on, or are outright sexist and/or racist, will not be able to make it through a good chunk of what Gygax cites as the influence for D&D. Of the works he named, I find Leiber's Fafhrd and the Gray Mouser to feel the most "D&D-like." (Though I suggest reading the stories from the collected volume II of their tales first, as those were written and published before the tales now collected in volume I. Also, they are just better stories.)

I think most people have heard this bit of historical perspective quoted or summarized, but it is still a little shocking for modern gamers to think of a table of players this large in number.
"Number of Players: At least one referee and from four to fifty players can be handled in any single campaign, but the referee to player ratio should be about 1:20 or thereabouts."
Or thereabouts. Yeah. I usually run for 3-6 players.

"There are three (3) main classes of characters:
Fighting-Men
Magic-Users
Clerics
"Fighting-Men includes the characters of elves and dwarves and even halflings. Magic-Users includes only men and elves. Clerics are limited to men only. All non-human players are restricted in some aspects and gifted in others. This will be dealt with in the paragraphs pertaining to each non-human type" (6).
This passage varies a little by printing. The original said "Hobbits," of course. The world "halflings" came after a letter from the Tolkien estate warning TSR about using the estate's intellectual property. This letter has been maligned by fans, but it's pretty typical, and a necessity for anyone who has such property; not defending it can weigh against you if it ends up in court. You don't have to sue people, but you do have to send them letters telling them to quit making free use of your ideas.
The more interesting thing here is that Gygax never uses the word "race" or even "demi-human." He does use "non-human." Elves, dwarves, and halflings are types of characters. Their class is prescribed such that even though Oe isn't "race-as-class" in the way that we refer to later rulesets like Moldvay 1981 Basic, it is functionally that. Halflings and dwarves are fighting-men. Elves are both magic-users and fighting-men (choosing each adventure the path in which they are training). There are no elf thieves or dwarf clerics. If I'm being charitable, I would note that Gygax was still very much mindful of the tie to miniature figures (witness the fact that Chainmail is the default combat system and the one in Dungeons & Dragons is presented as an alternate). I would argue he is really describing unit types, not monocultural archetypes. After all, he is basing it on fiction. In Tolkien elves were magic-user/fighting-men. Dwarves could put magic into their creations, it seems, but you never see one casting a spell. Hobbits "possessed little or no magic" except the every-day sort that allowed them to disappear easily when big folk were about. And the same is pretty true for other fantasy literature pre-dating D&D. You can find some examples of magical dwarves, but the distinction among fey-folk in general isn't very strong prior to Tolkien. But moving on...

"Note that Clerics of 7th level and greater are either “Law” or “Chaos,” and there is a sharp distinction between them. If a Patriarch receiving the above benefits changes sides, all the benefits will immediately be removed!" (7).
No neutral clerics. Frankly, I like it. But then I like alignment when it is just Chaos and Law. Read Moorcock's Corum novels or Three Hearts and Three Lions. I like the idea of a kind of war between immortal courts that spills over into characters in the world. Are we not all just pawns in the games of the gods - presuming there are gods, which default D&D clearly asserts there are.
"As flies to wanton boys are we to the gods; they kill us for their sport."
From King Lear, William Shakespeare

Charisma Is for Monsters

Anyone can hire men-at-arms and such, but the “primary function” of CHA is “to determine how many hirelings of unusual nature a character can attract. [...] Charisma will aid a character in attracting various monsters to his service" (11). Also, "Monsters can be lured into service if they are of the same basic alignment as the player-character" (12).
Okay, this is interesting. I don't think future editions spell this out quite as clearly. Charisma seems to be used for more general reactions, including those of monsters, but not for recruiting them as hirelings or even retainers. I like this a lot. It gives characters another reason to adventure -- hits that ole' "Gotta collect 'em all" Pokémon itch.
Converting those captured and their loyalty is handled on page 13, with at least one disturbing note.
"Capture of Non-Player Monsters: Morale dice can cause a man or intelligent monster to attempt to surrender or become subdued. When this happens an offer of service can be made (assuming that communication is possible) as outlined above. Subdued monsters will obey for a time without need to check their reactions, and such monsters are salable (see Book II)."
Salable. As in a slave auction for intelligent monsters? Hrm. Historically accurate perhaps, but ...

Look. I cut my teeth on Holmes Basic and quickly dropped into AD&D as those books were published. Yes, I am old. I began gaming around '77 at the age of 10. I'm not trying to start edition wars here, I'm just making the observation that...
There is very little difference between the three little books of Oe D&D and Moldvay/Cook's 1981 Basic and Expert D&D. The differences are really about tone, advice, and very minor rules changes. (Variable damage coming into Moldvay Basic by way of Oe Greyhawk and then Holmes Basic).
I have been playing Old School Essentials (a B/X retroclone) for nearly a year now and everything I read in Oe seemed basically the same. They have more in common than not. You could easily move characters from one game to the other with little or no change.
That can't be said of AD&D. It has a number of key departures that send D&D off on the line that most people know and refer to when they name an edition (1e, 2e, 3.x, 4e, and 5e). The ability to mix-and-match races and classes, variable weapon damage and abilities, skills packages (which I believe really came in with 2e if you don't count the thief), expanded spell lists, individual initiative, etc.
Which is better? That's for each of you and your playgroup to decide, individually. IOW, there is no absolute better, just a preference in context. If you say otherwise, you are probably a "Soup-Nazi" gatekeeper.

This spell. Super cool. I would cast it, or rather my character would. But man does it bone you. Here's the range.
Low end, I get three yes/no questions and the being I contact is not likely to know the answer or tell me the truth. If I get an answer, I can't trust it. In fact, since the being is 75% likely to NOT know and 70% likely to lie, I might be better thinking of the answer as "not the truth." But at least I won't go insane.
Top end. Oh, I'm going insane (90% chance) but before I do, I get 12 yes/no questions that I can trust. The deity is 95% likely to know what it's talking about and 100% likely to tell me the truth. But yeah ... insanity.
Luckily it only lasts for 12 weeks, at most. I'll get over it.

There are so many things worth mentioning that I have noticed on previous reads and just skimmed over this time - like the fact that there are no d10s (though you can simulate it with a d20), or the often-horrible artwork. But I'll leave you to discover that stuff. As I said, I've made no attempt to be thorough.